From a page on the ASEPO website. View the full page here.

Can COVID hitch a ride on fog particles that I inhale?

Numerous peer-reviewed medical journal reports (linked below) repeatedly establish that Triethylene Glycol (TEG) and Propylene Glycol (PG) have rapid anti-microbial characteristics. Recent studies of one particular formulation confirmed that viruses stronger than Covid can be reduced by 99% in one minute of exposure.

Virus particles are going to be airborne with or without fog. It can be beneficial to allow viral particles join with glycol fog droplets where, according to the peer-reviewed studies, they are quickly inactivated by the glycol. It might be the only thing we have available that can destroy microbes while they float in the air. Also, a common theory holds that as the particles combine and become heavier, they travel less and fall faster.

Does atmospheric fog & haze tax our respiratory systems, and thus make us more prone to infection?

According to the EPA research into 75 years of leading scientific studies, there is no evidence that accepted exposure limits "tax" one's health. The droplets of water/glycol are organic and, when inhaled, whatever material doesn't evaporate into a gas is easily absorbed and processed by the body without causing stress. Again, the role glycol plays in the destruction of airborne microbes can actually help inactivate functional pathogens before they even enter the body.

If glycols are so lethal to viruses, aren't they also harmful to me?

Many chemicals are safe for humans while also destructive to microbes. For example, the chlorine in your tap water is perfectly safe at established levels and even at the higher levels found in swimming pools. However, it can be very toxic consumed in high concentrations. Even oxygen is harmful to humans in high concentrations.

Are glycol-based fogs and hazes "pollutants"?

"Pollutant" is a very generalized term that includes tap water poured down a storm drain. That term can be inflammatory and provides no indication of actual hazard or toxicity. It is more important to know the actual risks associated with a material and its use, as well as how such risks are being properly mitigated to maintain safety.

Are glycol-based fogs and hazes "irritants"?

According to OSHA, TEG and PG are NOT considered "irritants" or "sensitizers". This does not mean, however, that people with compromised health or heightened sensitivities won't experience aggravations from exposure. Such reactions are rare, and easily remedied by moving into fresh air and drinking water.

There is a long history of medical studies and peer-reviewed journal reports confirming the anti-microbial characteristics of Triethylene Glycol (TEG) and Propylene Glycol (PG) vapors.

Below are quotes from 75 years of these reports.

(Click to view all 5 pages • citations hyperlinked to full reports) 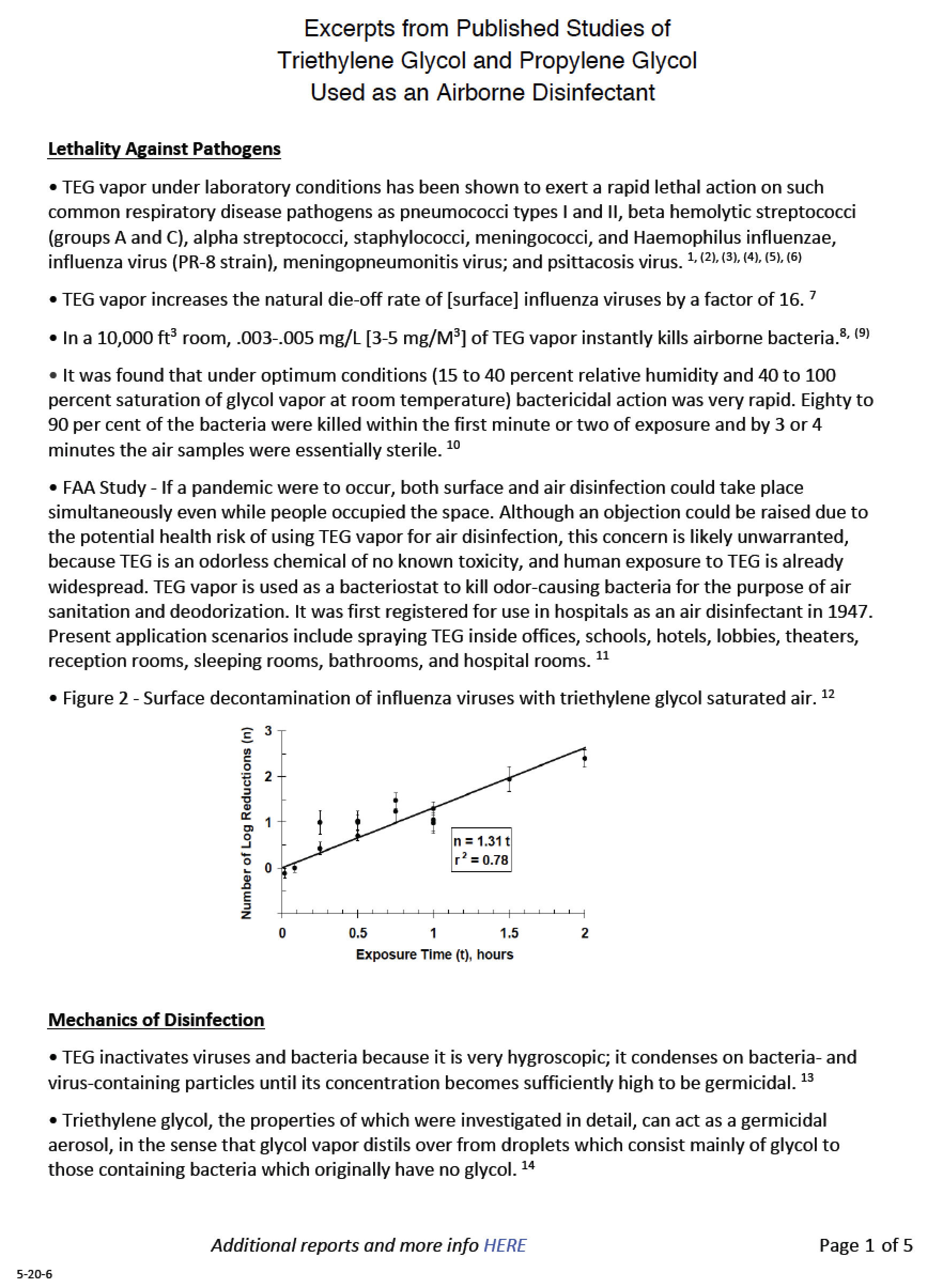 No. Smoke is made up of solid particles that are a by-product of combustion. Glycol/water fogs are not burned, they are vaporized similar to boiling water. They become pure liquid micro-droplets that leave no residue when evaporated.

What are the industry guidelines regarding fog/haze use?

In 2019, the Industry Wide Labor-Management Safety Committee researched and revised regarding the use of artificially created atmospheric fog & haze. It provides current guidelines,  standard practices, and contains well-researched scientifically-driven safety information. For example, it recommends notifying the cast and crew in advance of the scheduled fog or haze use. Providing them this bulletin is an informative way to communicate that notice.

The SAG-AFTRA Blue Ribbon Commission has also assembled an outline of points you should know when working around artificial fog and haze. It speaks to all forms of "smoke" in general; and not specifically glycol-based options. It describes some of your rights along with resources with whom to voice your concerns.

How do I know what is in the fog fluid?

Safety Data Sheets (SDS) are typically available from the special effects department operating the fog/haze equipment. A review of this document should indicate the contents of the fluid.

There are six industry accepted glycols: triethylene, propylene, dipropylene, polyethylene, 1,2- butylene, and 1,3-butylene. Glycols to avoid are ethylene, diethylene, and 1,4-butylene. The table below outlines the contents of many fluids.

What other products contain TEG and PG?

Due to the safety profiles of these glycols, they can be found in many consumer products including soaps, shampoos, eye drops, asthma inhalers, nebulizers, air sanitizer mists, personal lubricants, oral medication, children's suppositories, and much more.

Is it harmful to children?

The EPA has determined that “There are no indications of special sensitivity of infants or children resulting from exposure to triethylene glycol. …The Agency has no risk concerns for triethylene glycol with respect to human exposure.”


Are there exposure limitations?

Although OSHA does not specifically regulate TEG and PG, The Entertainment Services and Technology Association (ESTA) and The American National Standards Institute (ANSI) recommend exposure limits of:

These limits have an enormous safety factor baked in. According to the EPA, mammalian tests "showed a lack of systemic toxicity at doses in excess of 1000mg per cubic meter. Chronic exposure of experimental animals to TEG at doses equivalent to or in excess of that dose for such studies has shown the chemical to be without adverse toxic effects."

What symptoms can occur from excessive exposure?

Glycols attract and absorb water. Although not dangerous, heavy or prolonged exposure can cause temporary dry mouth and eyes, easily remedied by drinking water. In rare cases, some people with heightened sensitivities can experience itchy eyes and irritated sinuses. Again, this effect is temporary with no permanent harmful effects and is quickly remedied by moving into fresh air.

Although glycerin is also non-toxic and possesses chemical similarities to glycol, studies have indicated it doesn't have the same lethal effect on airborne microbes.

How safe are mineral oil fogs and hazes?

Highly refined mineral oils have a history of safe use at low levels, and are regulated by OSHA due to their prevalence in machine shops. The important factor is that it's "highly refined", meaning any impurities which can be toxic have been removed. Excessive exposure to mineral oils swallowed orally can result in the temporary symptom of diarrhea. Their interactions with airborne microbes and pathogens are currently unknown.

How safe are non-liquid fog options?

Other choices for fog effects have included olibanum, smoke cookies, and smoke pellets. All of these produce solid smoke particles and do indeed present toxicity concerns. As in the use of cigarettes on set, these items should be used sparingly to minimize exposure, especially around children. Their interactions with microbes and pathogens are currently unknown.

The most common cryo-fogs are produced using Carbon Dioxide (CO2) or Liquid Nitrogen, both common airborne gases. Large quantities dispersed over time can alter the the normal airborne gas ratios of Oxygen/Nitrogen/CO2, and must be supervised by a trained technician. Periodic ventilation practices must be observed, and people's interaction with it monitored.  Being heavier than air, cryo-fogs are often used to make beautiful, low-lying floor-fog effects that displace the low-lying oxygen, necessitating proper care to insure no people are lying in it and thus suffocating. There is one cryogenic option that allows actors to safely lie within a floor fog effect - Liquid Air. It's a bit more expensive and usually sold by the tanker truckload.

We took the liberty of reviewing the SDSes of many popular fog and haze fluids, and listing them in this easy-to-read table. Click on it to view and download a pdf version. 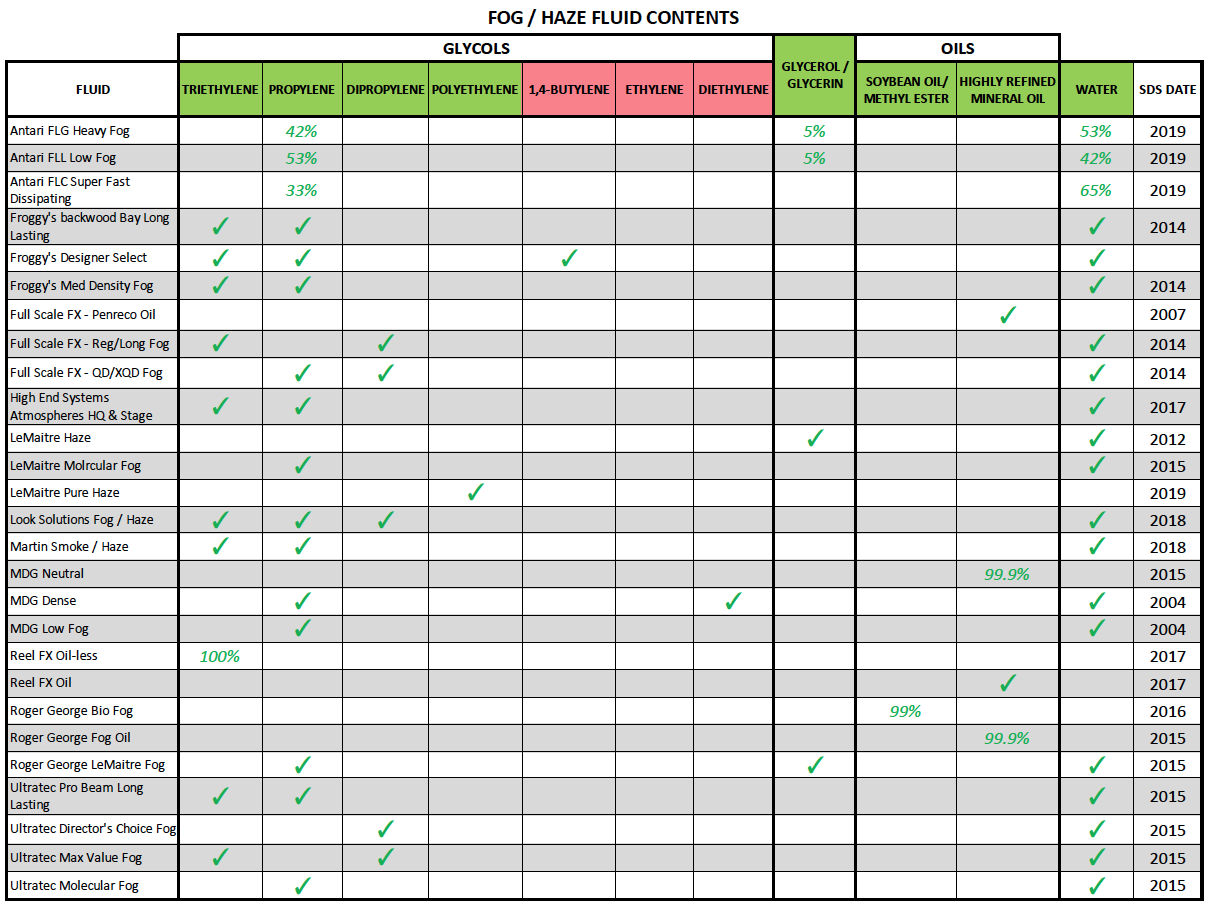 Unfortunately, no. Any disinfectant used in the workplace or around the public must be registered for that purpose by the US EPA. At least one of our fluid manufacturers is well on the path to EPA approval with a specific formulation that is being properly tested for confirmed efficacy. Meanwhile, we can't know which glycol fogs will most effectively destroy viruses, but we do know they're not helping transmission. Glycol fogs & hazes are still allowed to be safely used as usual as a lighting enhancement effect. The anti-microbial characteristics are only a possible secondary benefit. No assurances or claims can confidently be made at this time.